What’s To Love About The Mutiny | Coconut Grove

The Mutiny is a condo-hotel located at 2951 South Bayshore Drive overlooking Sailboat Bay. The Mutiny has become a favorite for those who want to live just steps from the heart of Coconut Grove's village. You will find a combination of 1-4 bedroom units with bay and city views. The building has resort style amenities including concierge, pool, fitness center, valet parking, bar, restaurant and room service.

History Of The Mutiny

The Mutiny is one of the most iconic buildings in the Grove due its' colorful past. Built in 1969, the downstairs "members only" club was popular among celebrities, the international jet set and music industry icons. Some have said it was the Studio 54 of Miami. At its peak, it had 11,000 card carrying members and sold more Dom Perignon than any other venue in America.

But the true players at the Mutiny had nothing to do with Hollywood, they were Miami’s drug lords. Multi-million dollar drug deals happened right there on any given night. So much so, that it was the inspiration for the legendary Babylon Club in the movie Scarface. In fact, Oliver Stone, Al Pacino and the rest of the cast and crew checked in for “research” purposes prior to filming.

As grandiose as the clientele was, The Mutiny was uniquely equipped to cater to their needs. The club had its own private plane to retrieve high-rollers, and the hotel converted an entire suite into a walk-in cooler to house the incredible amount of alcohol it required.

As law enforcement began catching up to the dealers the hotel suffered and was eventually shut down. The owner, Burton Goldberg, sold the club in 1984 for $17 million. The new owners tried to convert it into a high-class, no crime establishment, but it didn’t catch on, and 2 years later the hotel was foreclosed on. For more than 10 years this building was shuttered and re-opened in 1999 as a completely renovated luxury condo-hotel that still operates today.

The Mutiny is a condo-hotel which means that owners can place their unit in the hotel program and earn income when they aren't using it. This is very appealing to anyone who is a part-time resident. Despite it's status as a condo-hotel, the building still has a percentage of full-time residents who enjoy the hotel style amenities and walk-ability to the center of town.

If you have been searching for a townhouse in the Center Grove then you know firsthand that inventory is at critically low levels. There are just 14 townhouses […]
Do you like it?
Read more

The Real Deal has reported that the home located at 3085 Munroe Drive in the exclusive gated community of Camp Biscayne, has sold off-market for $46,000,000 making it […]
Do you like it?
Read more

Despite all of the new homes that have been built over the last 10 years in Coconut Grove, there are still opportunities to purchase land and build your […]
Do you like it?
Read more

The current market conditions in Coconut Grove are like nothing we have ever experienced before. Prices are rising faster than at any other time in history and inventory […]
Do you like it?
Read more

Coconut Grove condos have performed very well so far in 2021 thanks to a large influx of buyers from out of town. Among the main condo buildings in […]
Do you like it?
Read more

Record-Breaking Price for a Single-Family Home in Coconut Grove Since 2018 3525 Anchorage Way has just closed for $15,965,000 which is the highest sale price for a single-family […]
Do you like it?
Read more

Just Listed By The Riley Smith Group We have just listed a fantastic home located on one of my favorite streets in North Coconut Grove.  3010 Emathla Street […]
Do you like it?
Read more

Sales Are Strong & Prices Are Rising At Park Grove

We are seeing very strong sales numbers at Park Grove, one of Coconut Grove’s newest luxury condo projects located along South Bayshore Drive. There have been 12 condos […]
Do you like it?
Read more 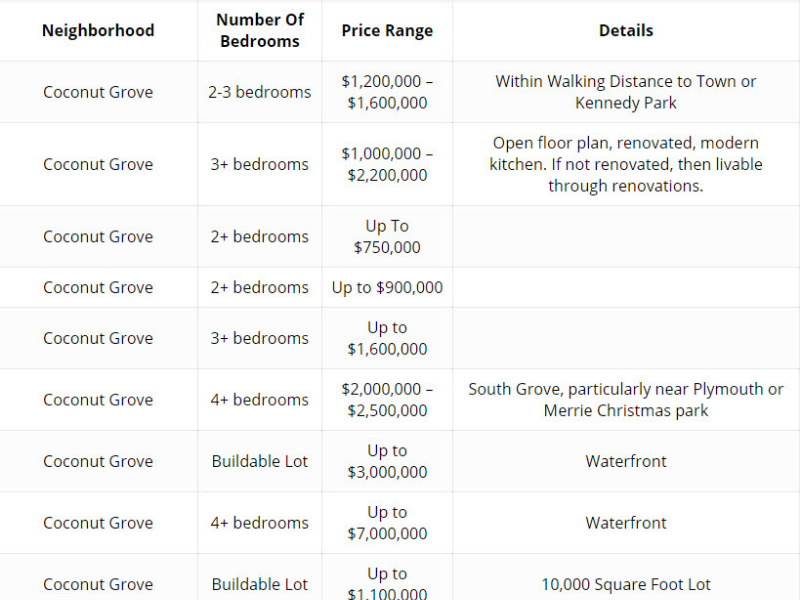 We Have 40 Buyers Looking For Homes In Coconut Grove

Buyers are Looking for Coconut Groves Homes The market is on fire and there are no signs that it’s slowing down. We just closed on 8 fabulous Coconut […]
Do you like it?
Read more
Load more
See All Posts